Due to the number of subjects and practice tests we offer, please tell us which test you'd like to see pricing for.

Not sure which test you're looking for? Use our search bar to find the test of your choice.

How to Avoid Careless Errors While Testing 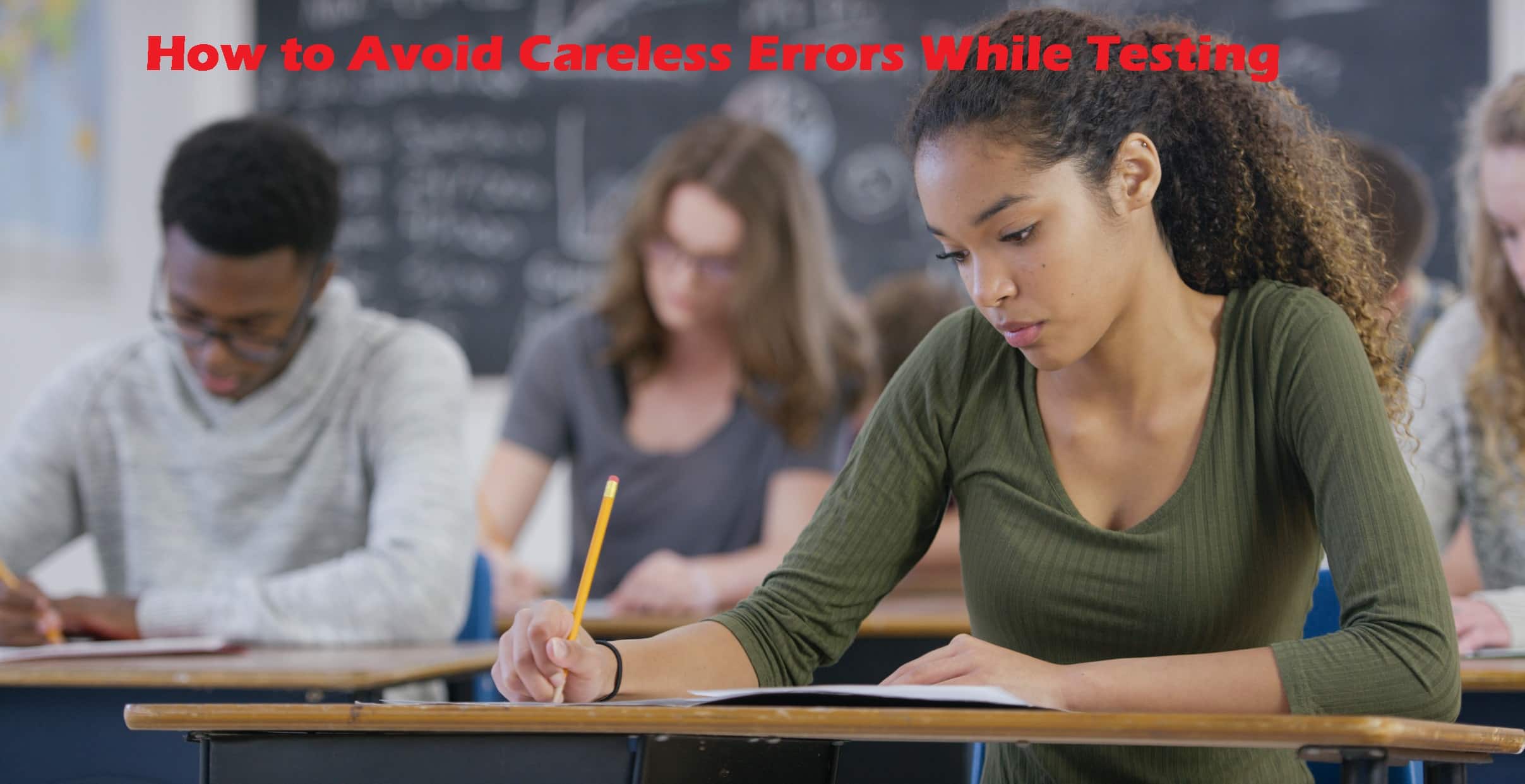 Testing is an integral part of modern education. Even though many people feel like they don't truly retain information crammed into their minds for tests, tests still serve as effective filters that separate students who know covered material from those who don't.

Let's look at several ways to avoid careless errors while testing, whether that's at college, secondary school, in the workplace, or for a driving test.

The Rigors Of Taking Tests

Standardized tests are an integral part of modern education, even though many people struggle with them. Fortunately, several strategies for increasing one's performance on standardized tests exist. However, none of them are cure-alls to failures to study, get enough sleep, eat proper breakfasts, and other common preparations that kick peoples' proverbial butts into gear.

Regardless of how well tests do in helping students learn and retain material, let's brush over several tips for avoiding careless errors while taking tests.

Face it - most people, especially males, don't have the cleanest, most legible handwriting. Sometimes, reading numbers and letters you've just written down proves prohibitively difficult, as if you're a modern, English-speaking and -reading citizen that's trying to read old-school Egyptian hieroglyphics for the first time, ever.

Rather than taking the risk of being unable to read your own handwriting during expensive, hours-long tests like the Graduate Management Admissions Test, which costs hundreds of dollars to take, be sure to write legibly.

If you're slated to take a standardized test in the next few weeks or months, practice next to a computer opened up to a spreadsheet so you can keep track of your mistakes.

Try your hardest to analyze mistakes as soon as they happen to increase your chances of correcting and - if all goes well, and you're lucky on test day - preventing mental processing errors to best boost your overall score.

If you own, rent, or otherwise have access to study materials that split similar types of problems into groups, work on problems according to grouping, being careful to take note of any calculating or reasoning errors you've made.

Working on problems in large groups of similar problems allows test takers to brush up on deficiencies in rapid-fire form. Do it the right way - it's your career!

Don't Take Too Much Time For Any One Problem

When practicing for whatever standardized certification exam you're slated to take, calculate how much time per question per section you're allotted.

As each new section comes up, make a list of what time you should be at for whatever problem you're on. In time, you'll be able to run through all problems consistently.

Lets get started on preparing now for your certifacation exam by checking out our practice exams.

3 Tips on How to Prepare for CLEP Exams

Certificate vs. Degree: Which Should You Get?

How to Pass the ASVAB Exams: Top 3 ASVAB Tips

How to Develop a Curriculum as a New Teacher

Tips to Prepare for the AONL CNML Certification Exam

How to Prepare for Certification Exams Over the Summer

How to Prepare for Your NYSTCE BEA Exam

5 Tips to Prepare for Your CCI Exam

How To Pass The HESI APRN Exam

What is AACN and How to prepare for the AACN Exams

What to Know About the HESI Psych Mental Health Exam

5 Tips to Prepare for Your NCCT NCPT Exam

How to Prepare for Your APA CPP Exam

How to Prepare for the SHRM CP Exam

The Benefits of Taking an APA Certification Test | Exam Edge

Why Practice Tests Help You Pass Your Certification Exam

How to Prepare for the NHA CCMA Test

What is the Canadian CDRE Test & How to Prepare

AANP vs ANCC -- What's the difference

What to know about SevSafe and Covid19

How to Begin a Career in Human Resources

What is the NCSBN Certified Medication Aide (MACE) Exam & how to pass?

What is the ANCC Psychiatric-Mental Health Nurse Practitioner (PMHNP) Exam and How Can I Pass?

What is the Nursing Acceleration Challenge Exam (NACE) & how to prepare?

What You Need to Know About the TACHS Exam

What are ASCP Exams & how to pass?

How to Pass The FTCE Exam: What you need to know

How to Properly Deal with Exam Stress

How to Pass Your ISSA PFT Exam (and Why it Matters!)

What to Expect on The Praxis Spanish Exam

A Guide to Passing the Praxis Elem Ed Mathematics Exam

Determine the Best Career Path for You

5 Things to Know to Pass the Praxis the First Time

How to Make a Study Timetable During the Holidays

7 Tips to Stay Motivated to Study During the Holidays

5 Misconceptions About Being a Dental Assistant

What to Know About the Canadian Nurse Registration Exam

Requirements for Working as a Nurse in Canada

How to Prepare for the ANCC FNP Nursing Exam

Why Being A Teacher Is Still A Crucial & Respected Job

5 Advantages Of Becoming A Psychiatric And Mental Health NP

Want To Become A Personal Trainer? Here's How To Pass The ACE Exam

How To Prepare For Your National Healthcare Disaster Certification

How to Pass the GACE Exam on Your First Try

Four Things You Should Know Before Your ANCC Certification Exam

Should You Take the AANP or the ANCC Certification Exam?

Best Study Habits for Preparing for the AANP Exam

Nursing Specialties: How Many Should You Choose?

How to Become a Teacher in Texas

Improve Your TEXES Test Results with these 5 Strategies

What a Career Path in Human Resources Looks Like

How to Secure a Job in Accounting

Benefits of Studying in the Morning, Afternoon, and Night

Test Taking Strategies to Help You Prepare for the FTCE Exams

Getting the Most Out of a Practice Test

Everything You Need to Know About Passing the Praxis SLLA Test

The Top Healthcare Certifications to Further Your Career

5 Test Taking Strategies That Will Improve Your Test Results

Nursing Career Roadmap - How to Advance Your Career

Everything You Need to Know to Pass the HESI Exam

How to Pass the NCLEX The First Time

7 Habits to Advance Your Career

ANCC Exam - What You Need to Know

Praxis Test - What You Need to Know

How to Avoid Careless Errors While Testing

AANP Test - What You Need to Know

FTCE Test- What You Need to Know

Breaking Down the Subjects of the Praxis

Top 5 Study Tips For Success on Your Certification Exam

NYSTCE Test- What You Need to Know